South African fast bowler Kagiso Rabada speaks in Hindi whenever he visits India during the Indian Premier League (IPL). Since Rabada has played for both teams in the North, Delhi Capitals and Punjab Kings, Rabada has had his share of failed attempts at speaking Hindi. However, little did he know that he would have to do that practice in Australia as well.

everyone laughed in the video

Rabada, who is with the South African squad for the T20 World Cup, featured in Indian radio jockey RJ Karishma’s video ‘How Not Impress Desi Girlfriend’s Parents’. Karishma first gave him lines for mother-in-law, then father-in-law. Rabada pronounces ‘Namaste Suar Ji’, which means a pig, instead of ‘Namaste Sasur Ji’. Karishma asks him to correct her and Rabada asks her to forgive him before committing a mistake. 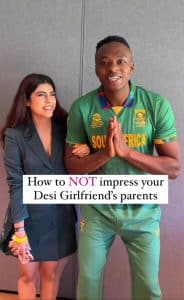 In the reel shared by RJ Karishma on her Instagram handle, Rabada can be seen giving fans a glimpse of her Hindi, as she does and what not to impress the parents of a ‘desi girlfriend’. Make suggestions about. The video begins with Rabada saying ‘Namaste’ in Hindi, after which he says, “East or West, my mother-in-law is the best.” However, then things take a hilarious turn as the star pacer says, “Main aapko par parivar ko pake dhaniya ho gaya hoo,” however, he says ‘dhaniya’ instead of ‘dhanya’. Then, when Karishma corrects him, Rabada Instead of saying ‘Sorry’, he apologizes by saying “Sorry I want to kiss”. 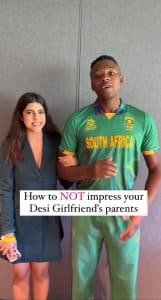 RJ Karishma then intervenes and cures him, after which she introduces Rabada to her father, whom he calls ‘Pig ji’ instead of ‘Sasur ji’. The reel ends there and desi netizens could not keep calm as the two shared. Reel on Instagram, the comment section of fans was flooded.